The history of the Bekoff brand dates back to 1903….

In a small town in South Bohemia, which was the territory of the former Austro-Hungarian Empire, lived my great-grandfather who liked simple and elegant caps, today known as "flat caps". My Great-grandfather was convinced that there was a space for innovation of old design and was thinking about custom production. Since he did not have much money, there was a long way from idea to production.

And as fate would have wanted...

In 1914 with the outbreak of the First World War, his plan was put on hold as he had to complete mandatory service with the army. He had a girlfriend at the time and took a picture of himself for her (see picture). 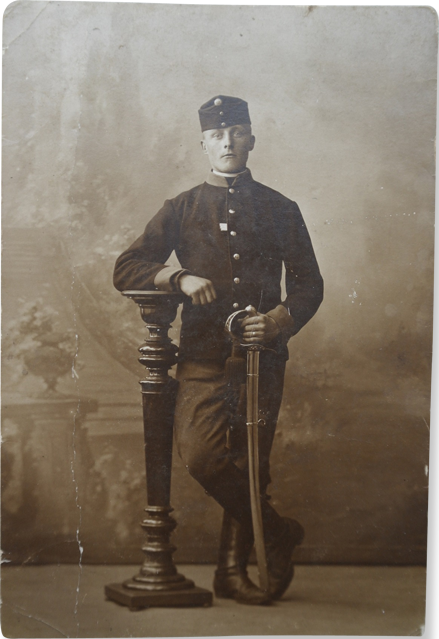 After the the war the idea died for several decades.

Meanwhile, I was born and as a young student in 2006 I left for Spain to study and work. It was Spain where I bought my first flat cap, without knowing it was a crucial moment. Until then, I never wore hats, but this one seemed to be created just for me.

After returning, I parted with the shabby flat cap with intention to buy a new one, but it was almost impossible to get a flat cap of the same quality and design in the Czech Republic. And then I got the idea. By pure accident during one random cleaning we ran into an old cap and my great-grandfather´s scraps with the idea of manufacturing flat caps that never started. Since then I haven´t doubted for a second ...

In 2014, after 110 years, under the name Bekoff, we started the czech production of handmade elegant caps. Now our customers can enjoy and share the passion that we put into creating each and every one of them.

How we do it

combine them and design everything

in-house and give rise to unique flat caps.

Thanks to the local hand sewing, each

flat cap is a masterpiece.

We ship directly to you and by

being online only, we eliminate